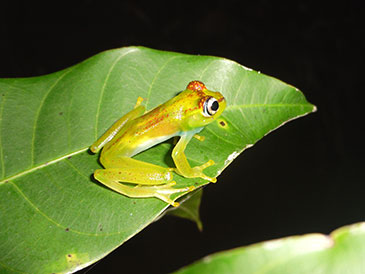 A new species of tree frog has been discovered in the forests of Madagascar by an MSc student at the University of Bristol.

Samuel Penny was studying the amphibians of the Sahamalaza Peninsula in the northwest of the island, with a particular focus on their acoustics, when he discovered the new species in the tree frog genus Boophis.

He said: "This brightly coloured tree frog has a distinctive advertisement call so by placing sound recorders at potential breeding sites, I could plot its distribution across a wide area of the Sahamalaza Peninsula. This also provided detailed information on acoustic variation between individuals and on how its calling pattern changed throughout the night."

The new species has been named Boophis ankarafensis as it was found on the banks of the hidden streams of the Ankarafa Forest.

The frog is green in colour with bright red speckling across its head and back.  Adult males are around 23-24mm long and females around 28-29mm long.  Fifty-six individuals of the species were detected on the banks of two streams in the forest: 48 males and eight females.

The males were found calling from vegetation around 0.5 to 2m high. They were often within close proximity to each another and positioned on different leaves of the same plant.

The new species is described in a paper published in the journal Zoo Keys, co-authored by Samuel Penny and an international team of scientists, headed by Dr Goncalo Rosa of the University of Kent’s Durrell Institute of Conservation and Ecology.

They said: "Despite its conspicuous call (a double click, compared to the usual triple), Boophis ankarafensis has not been detected from other surveys of northwest Madagascar and it is likely to be a local endemic to the peninsula.

"Although occurring inside a National Park, this species is highly threatened by the continuing decline in the quality and extent of its habitat.  Due to these threats it is proposed that this beautiful new species should be classified as critically endangered according to the IUCN Red List criteria."

Samuel Penny undertook this research and completed his thesis in the lab of Dr Marc Holderied in Bristol's School of Biological Sciences. He was co-supervised by Dr Christoph Schwitzer from Bristol Zoo's Bristol Conservation and Science Foundation.