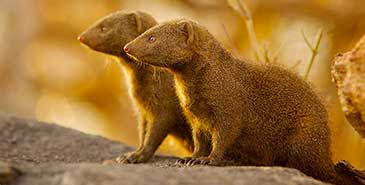 Just as soldiers on sentry duty constantly adjust their behaviour to match the current threat level, dwarf mongoose sentinels exhibit flexible decision-making in relation to predation risk, new research from the University of Bristol has shown.

Biologists Julie Kern and Dr Andy Radford found that decisions about when to go on duty, what position to adopt and how long to remain on post were all affected by information about the likelihood of danger. Sentinels altered their behaviour depending on both environmental conditions, such as wind speed and social signals, such as alarm calls.

The new study, published in Animal Behaviour, shows that mongooses are capable of real-time behavioural plasticity in response to both direct and indirect indicators of predation risk.

Julie Kern, lead author and PhD student, said: “Our work demonstrates how sentinel behaviour is adjusted flexibly with regard to information presented on various time scales, highlighting the complexity of animal decision-making processes.”

The work was conducted on a wild population of dwarf mongooses that are individually marked and habituated to the close presence of observers.

Dr Andy Radford, co-author and Reader in Behavioural Ecology in the School of Biological Sciences, said: “Being able to walk within a few feet of these animals as they go about their daily routines allows detailed investigations into behaviour in natural conditions.”

Foraging group members rely on sentinels to warn them of approaching danger, but also to inform them of the current level of threat. That way they can optimise their own behaviour in terms of time spent foraging versus being vigilant.

Dwarf mongooses, Africa’s smallest carnivore, live in close-knit family groups of between 5 and 20 individuals. Each group spends the night in a safe retreat, such as a termite mound, and emerges to spend the day foraging for buried insects and lizards. They are vulnerable to a wide range of predators, including snakes, cats and birds of prey.

Further information about the Dwarf Mongoose Project is available at http://dwarfmongooseresearch.weebly.com/