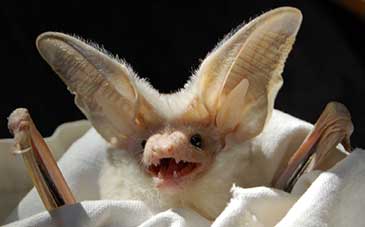 Bats could be more flexible in their echolocation behaviour than previously thought, according to a new study into the foraging techniques of the desert long-eared bat by researchers at the University of Bristol.

Echolocating bats have historically been classified into two groups: 'loud' aerial hawkers who catch flying insects on the wing and 'whispering' gleaners that pick up prey from the ground.  While some bat species can forage in multiple ways, others have limited flexibility in the amplitude of their echolocation calls.

Dr Talya Hackett and colleagues studied the desert long-eared bat (Otonycteris hemprichii), said to be a passive 'whispering' gleaner that picks up ground-dwelling invertebrates, such as scorpions, from the desert floor.

Using an acoustic tracking system, the researchers recorded the bats flying at four different foraging and drinking sites in the Arava and Judean Deserts in Israel.  They then compared the bats' flight height, flight speed, call duration, pulse interval and source levels with those of other gleaning bats.

Differences were found in all these variables, with the most striking being the source levels: bats were recorded calling at an average of 119 decibels, akin to a 747 jet on take-off, when around 75, akin to a car engine, is more usual when gleaning (though these sounds occur at a high frequency, beyond the range of human hearing).  Analysis of the bats' faeces also indicated that their diet included prey species capable of flight, such as flies, moths, and beetles.  This suggests that the bats switched from passive gleaning to capturing airborne insects (aerial hawking).

Dr Hackett said: "Although whispering bats have been known to opportunistically catch insects on the wing, this doesn't appear to be the case here.  All the bats' calls we recorded were loud and we didn't observe any low flying search tactics which suggests that the bats were exclusively aerial hawking."

Gleaning bats, like the ones in this study, usually have long ears for the detection of faint sound cues and low wing loading to allow them to carry heavy loads – features that increase drag and are linked to slower flight.  So why would bats adapted to one foraging mode (gleaning), adopt another (hawking)?

Co-author Dr Marc Holderied said: "Changes in environmental conditions or prey availability could explain this change in the bats' behaviour.  We studied them towards the end of an exceptionally hot and dry summer so it's likely the usual prey animals were scarcer: desert scorpions, for example, become more inactive during dry conditions.  As a result, the bats might have entered different habitats with artificial irrigation or attacked different prey, adopting a different foraging mode when their typical prey was scarce."

Not only did the desert long-eared bat switch foraging modes but it also drastically altered both its call and flight behaviour when doing so.  The variability in source levels recorded was the most extensive change seen in any bat species, indicating that perhaps bats are more flexible in their echolocation behaviour than previously understood.

'A whispering bat that screams: bimodal switch of foraging guild from gleaning to aerial hawking in the desert long-eared bat' by Talya D. Hackett, Carmi Korine and Marc W. Holderied in the Journal of Experimental Biology