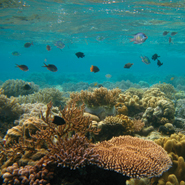 Damselfish on a reef Steve Simpson

Unseasonal warm temperatures caused by El Niño have a profound effect on the fish populations of coral reefs in the South Pacific, scientists have found.

Unseasonal warm temperatures caused by El Niño have a profound effect on the fish populations of coral reefs in the South Pacific, scientists have found.  An international team of biologists studied the arrival of young fish to the atoll of Rangiroa in French Polynesia for four years and compared their results with satellite and oceanographic data.  They found that the El Niño event caused a sudden collapse in the plankton community and this led to a near absence of the young fish that are required to replenish adult stocks.

Coral reef fishes are bad parents.  Rather than caring for their young, they disperse them into the open waters off the reef where they drift with the currents while they grow and develop into small juveniles, at which point they make their way back again to the reef.  This process allows these baby fish to feed on plankton and escape the predators that would consume them if they had to grow up on the reef with adults.  But in a changing climate, this dispersal into the haven of open water could now become an Achilles’ heel for coral reef fishes.

Using a crest net – which looks like a football goalmouth facing out to sea on the edge of a barrier reef – the scientists were able to monitor the numbers of fish as they returned to reefs from open water.

Under the supervision of Professor René Galzin, Dr Alain Lo-Yat and assistants from Service de la pêche set and emptied the net on the atoll of Rangiroa for four years, a period that included the intense 13-month El Niño event of 1997-8.

Climate scientist Elodie Martinez from France and marine biologists Dr Steve Simpson and Dr Mark Meekan then analysed the data, the longest time-series of its kind, to detect and explain the worrying trends.  The paper is published in the journal Global Change Biology.

Dr Steve Simpson from the University of Bristol’s School of Biological Sciences said: “Near to the equator, fish arrive throughout the year to replenish adult populations.  In contrast, during the El Niño event at Rangiroa, when temperatures climbed up to 3.5°C above the seasonal average, we found that the young fish virtually disappeared.

“Analysis of satellite images around Rangiroa suggested that plankton, the food supply for many baby and adult reef fishes, declined dramatically during the warm waters of El Niño.  As a consequence, adults struggled to produce offspring and young fishes were likely to starve when in open waters off reefs.  Just 1-2 months after the onset of the warm conditions, the next generation of young fish stopped arriving so that adult stocks were no longer being re-supplied.”

Dr Meekan said: “The events we witnessed during El Niño are a worrying sign for the future when climate change is predicted to warm ocean temperatures and may even increase the frequency of the El Niño phenomenon”.

Warns Dr Simpson: “Coral reef fisheries provide food and livelihoods for hundreds of millions of people throughout the world and underpin a multi-billion dollar tourism industry.  Our study shows that warmer waters may leave fish stocks on reefs in serious trouble, which will have far-reaching consequences for the people around the globe who are dependent upon them.”