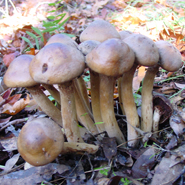 An image of Armillaria mellea, commonly known as the 'honey fungus'. Kendra Baumgartner

An international team of scientists has developed a new technique to aid crops at risk from a devastating agricultural parasite commonly known as the ‘honey fungus’, one of the most serious diseases of trees and shrubs across the northern hemisphere. The development allows crops to be screened for natural resistance by adding DNA with fluorescent genes to the fungus before being planted out.

An international team of scientists has developed a new technique to aid crops at risk from a devastating agricultural parasite commonly known as the ‘honey fungus’, one of the most serious diseases of trees and shrubs across the northern hemisphere. The development allows crops to be screened for natural resistance by adding DNA with fluorescent genes to the fungus before being planted out.

The research, a collaboration between the United States Department of Agriculture’s Agricultural Research Service and the University of Bristol, has the ability to transform and to genetically manipulate the plant-pathogenic fungus Armillaria mellea by artificially introducing DNA into it. DNA was introduced using Agrobacterium, a bacterium that is commonly used to genetically modify plants.

This powerful technique has been immensely important in the study of other pathogens in the laboratory, in terms of pinpointing how the pathogens enter and spread through plants and, then, developing control practices that prevent or minimise infection.

The honey fungus is a devastating disease for many hundreds of different species of trees and shrubs, ranging from those important for timber production to various orchard and vine fruits and numerous ornamental shrubs, so is of importance in forestry, agriculture and gardening.

Infections result in a reduced growth rate of the host plant, premature wilting of the foliage, lower harvests and eventually death of the plant. This is often accompanied by the growth of honey-coloured toadstools – the fruiting bodies of the fungus, which are responsible for its common name. The fungus attacks the roots of the plant and can spread through the soil, meaning that once infections are established they can move to nearby plants and spread throughout a wide area. Indeed the term “humungous fungus” has been coined for this group of Armillaria species as some colonies have been found where one individual fungus covers an area in excess of 15 hectares.

Controlling the fungus is very difficult. The most effective pesticide to prevent Armillaria root disease, methyl bromide, is being phased out (except for quarantine and critical uses) due to its role in depleting the stratospheric ozone layer. There are few alternatives for preventing or curing infections. The disease is particularly damaging to orchard or vine crops as the infection could wipe out production long before the costs of establishing the orchard have been recouped. Because the fungus persists on dead roots buried in the soil, it is likely that any new plants put into the same area would also be vulnerable to attack.

In a garden setting there are no chemical control measures, meaning that using naturally resistant plant varieties is important. This work will allow us to genetically modify the fungus so that it can be easily identified, measured and studied in a lab situation.

Professor Gary Foster, a plant pathologist from the University of Bristol’s School of Biological Sciences, said: “The ability to track and visualise the fungus as it enters and grows through a plant will help us understand how this fungus behaves in the field. Such knowledge is an important step towards helping us to devise better control strategies in the future.”

Dr Kendra Baumgartner, a specialist in vine and tree crop diseases from the US Department of Agriculture, said: “Efforts are already under way to identify rootstocks of grapes, walnuts, and stone fruits that are naturally resistant to infection. The improved screening that is enabled by using transformed strains of Armillaria should allow more rapid identification of resistant plant materials.”

Being able to transform the fungus also helps with investigations into its population structure. These species are unusual as they can produce new genetic types without going through a conventional sexual cycle. When two individuals meet, there is the chance that nuclei from one strain can invade and recombine with nuclei in the other fungus, giving rise to new genotypes with new and novel traits.

Dr Andy Bailey, a mycologist at the University of Bristol, said: “This can be studied in far more detail now that we are able to introduce genes that are easy to follow.”

The work was funded with support from the Organisation for Economic Cooperation and Development’s Cooperative Research Program in Biological Resource Management for Sustainable Agricultural Systems, and will appear in the December issue (24) of Applied and Environmental Microbiology.