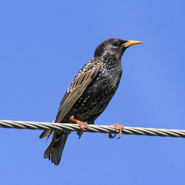 Farmland birds that are poorer parents and less "brainy" are faring worse than other farmland bird species, a study at the University of Bristol has found.

Farmland birds that are poorer parents and less "brainy" are faring worse than other farmland bird species, a study at the University of Bristol has found.

The new research, published today in Proceedings of the Royal Society B, found that farmland birds are undergoing dramatic decline across the world, but some bird species are suffering more than others.

Unexpectedly, the study also found that medium-sized birds, for example, starlings and skylarks in Europe, rather than large birds were found to suffer more in farmland, unlike studies of other animals in other habitats where the largest species have been found to fare worst. Birds with relatively large brains and traits associated with increased flexibility were considered to be less vulnerable, as were birds that invested more in their young (spending a longer period of time incubating eggs and feeding fledglings).

Dr Michael Pocock, NERC Research Fellow in the University’s School of Biological Sciences, studied the features of farmland songbirds in Europe and North America to find which aspects of bird biology made them more likely to suffer as farming becomes increasingly intensive.

Dr Pocock said: “Biodiversity faces extraordinary threats owing to environmental change, and many species are suffering rapid decline. Agricultural intensification is one of the major drivers of global environmental change. Its impacts on birds are well known and include population declines in Europe and North America.

“Although more work is needed, eventually we could predict, from aspects of their biology, which bird species will do poorly and to ensure conservation efforts can be focused more efficiently and effectively.”