Taking the pulse of coral reefs 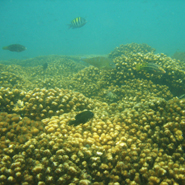 Healthy reefs with more corals and fish generate predictably greater levels of noise, according to researchers working in Panama. This has important implications for understanding the behaviour of young fish, and provides an exciting new approach for monitoring environmental health by listening to reefs.

Healthy reefs with more corals and fish generate predictably greater levels of noise, according to researchers working in Panama.  This has important implications for understanding the behaviour of young fish, and provides an exciting new approach for monitoring environmental health by listening to reefs.

Contrary to Jacques Cousteau’s ‘Silent World’, coral reefs are surprisingly noisy places, with fish and invertebrates producing clicks and grunts which combine to produce cacophonies of noise.  Each reef is subtly different depending on the size and composition of the resident community.

By analysing recordings of coral reefs from the Las Perlas Archipelago in Pacific Panama (Central America), marine biologists have found that some reefs are noisier than others, and these differences in noise provide useful information about the state of the reef.  Exeter University PhD student Emma Kennedy and her supervisor Dr Steve Simpson, working with an acoustician Dr Marc Holderied, also from the University of Bristol’s School of Biological Sciences, found that healthier reefs were louder, with a clear association between overall noise level generated and the amount of living coral.

A more detailed investigation of the sound produced by some of the reefs showed that lower frequency sounds provided more information on the numbers of fish living on the reef, while the intensity of higher frequency reef sounds gave an indication of coral diversity.  This is the first time that a link has been made between noise generated by individual reefs and the specific habitats and communities making up that reef.

Previous work by Dr Steve Simpson has shown that larval fish and corals returning to reefs after spending their first few weeks out in the plankton, search for habitat by listening out for, and moving towards, reef noise. Sound travels well underwater, meaning that noise produced by a reef can propagate several kilometres out to sea.

Dr Simpson said: “This study provides evidence that reef generated sound contains a real richness of information.  This would provide fish and invertebrates with the cues they need to assess the quality of potential settlement sites before they can see them, a bit like wandering around a music festival eavesdropping on different bands before choosing where to pitch your tent.  It may even provide the information that enables some fish to return to the very reef on which they were originally spawned.”

The study also highlights the potential for using audio recordings to monitor the health of reefs.  Usually, scientific assessment of reef health requires teams of scuba divers and huge quantities of equipment and so is costly, time consuming and difficult in remote areas.  In this study, scientists dropped a cable off the side of the boat with a hydrophone (underwater recording device) attached.  A two-minute recording contained enough information to distinguish between reefs. This is a very encouraging find for the development of acoustic recordings as ecological survey or monitoring tools.

The team are hoping that their findings will prompt other scientists to investigate reef sound further.

Emma Kennedy said: “Investigation of the acoustic properties of reefs is a relatively new area of science but already we’re realising that there’s more to underwater noises than just whale and dolphin communication!  Reefs may be broadcasting a lot of information out into the sea that both humans and marine animals could use. We’re hoping that our findings will encourage more research into this area, and are excited this might lead to the development of new tools for assessing reef health.”

The research was a collaborative effort carried out from the Smithsonian Tropical Research Centre with Dr Hector Guzman (STRI) and Professor Hamish Mair at Heriot-Watt University in Edinburgh.

The research is published in the Journal of Experimental Marine Biology and Ecology, and was funded by Natural Environment Research Council (NERC, UK) grants to Steve Simpson and Emma Kennedy.

Dr Steve Simpson is based in the School of Biological Sciences at the University of Bristol. His work on reef fish behaviour has been published in Science and widely covered in the UK and international media.

Emma Kennedy is a PhD student at the College of Life and Environmental Sciences at the University of Exeter. She works on Caribbean coral reefs, as part of a team of tropical marine spatial ecology researchers.