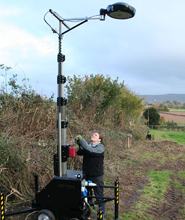 Emma Stone carrying out research in the field

A PhD student from the University of Bristol has received a national award for her research investigating the impact of artificial lighting on bats.

A PhD student from the University of Bristol has received a national award for her research investigating the impact of artificial lighting on bats.

Emma Stone, a researcher in the University’s School of Biological Sciences, has received the Vincent Weir Scientific Award for her research, which has made a significant contribution in bat conservation.

The Vincent Weir Scientific Award, hosted by the Bat Conservation Trust, aims to reward and encourage research on the conservation biology of bats by young researchers and to recognise The Hon. Vincent Weir’s major contributions to the field.

Emma’s work, a bats and lighting project, focuses on the ecological effect of artificial lighting and its impact on the foraging and commuting behaviour of bats. A topic of increasing concern, recent estimates have shown a 24 per cent increase in light pollution in the UK between 1993 and 2000.

As part of the research, Emma launched an online survey to find out what the public feel about street lighting in their area. As with many conservation issues the impacts of lighting on wildlife involve interactions between humans and the environment.

Emma said: “I’m thrilled to have received this award for my research as despite the increase in light pollution, few studies have investigated the impact of artificial lighting.”

Following her award Emma was invited to present her research findings at the International Congress for Conservation Biology in Canada. The symposium at the congress was on the ecological impacts of lighting highlighting the disruptive effects on bats through light pollution.

Emma’s area of interest is conservation biology, in particular the behavioural and ecological responses of wildlife to changes in the environment.

Emma is very much conservation focused and has worked with a variety of animal groups, including carnivores, birds, small mammals, reptiles and amphibians.

Emma will receive her award at the National Bat Conference, hosted by the Bat Conservation Trust, on the 11 September 2010.