Less is more for a hungry bat 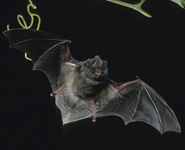 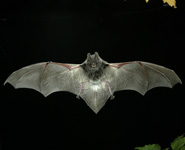 Like a stealth fighter plane, the barbastelle bat uses a sneaky hunting strategy to catch its prey.  A team of researchers from the University of Bristol combined three cutting-edge techniques to uncover the secret of this rare bat’s success.

Like a stealth fighter plane, the barbastelle bat uses a sneaky hunting strategy to catch its prey.  A team of researchers from the University of Bristol combined three cutting-edge techniques to uncover the secret of this rare bat’s success.

Every night a battle between bats and their insect prey rages above our heads as bats call and listen for the echoes of their dinner.  Many moths have developed a special anti-bat defence; unlike us, they can hear the ultrasonic calls of bats and avoid an attack with evasive flight.

Until recently, it seemed that these moths had outmanoeuvred bats in this evolutionary arms race, but researchers from Bristol’s School of Biological Sciences have discovered that one special bat species (Barbastella barbastellus) has an unexpected counterstrategy to this defence: whispering.

The barbastelle bat is a very successful hunter which eats large numbers of moths.  However, the researchers did not know whether most of these moths were earless and thus unable to hear predators approaching, or whether the bats had found a way to catch moths that could hear them coming.

While previous studies could only determine the types of insects the bats had eaten (beetles, flies, moths and so on), researcher Matt Zeale developed a method using a new set of genetic markers to identify the species of those insects.  This established for the first time that the barbastelle almost exclusively preys on moths that have ears.

In order to find out why the barbastelle can catch such moths when other bats cannot, the researchers then measured how well moths can detect different bat species by recording the activity of the nerve in the moth’s ear while tracking the position of flying bats at the same time.  This happened in several locations around Bristol including a graveyard in Clifton.

Dr Hannah ter Hofstede said: “Recording from the ear of a moth in the field was a real challenge but it yielded some amazing results.  Whereas moths can detect other bats more than 30 m away, the barbastelle gets as close as 3.5 m without being detected.”

The researchers then analysed the barbastelle’s echolocation calls and found that they are up to 100 times quieter than those of other bats.

Dr Holger Goerlitz said: “We modelled detection distances for bats and moths and found that by whispering, the barbastelle can hear the echo from an unsuspecting moth before the moth becomes aware of the approaching bat.  This advantage, however, comes at the cost of reduced detection range, similar to us trying to navigate in the dark using a lighter instead of a spotlight.”

The barbastelle bats’ strategy is successful as it enables them to catch moths that would normally fly away and to avoid competition by feeding on prey that other bats find much more difficult to catch.

Such success is unusual, Dr Goerlitz said: “It’s a rare case in evolution that a predator wins the arms-race with its prey because the predator only loses its dinner, but the prey loses its life.”