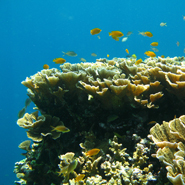 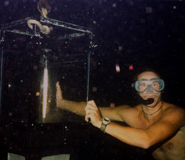 The growing amount of human noise pollution in the ocean could lead fish away from good habitat and off to their death, according to new research from a UK-led team working on the Great Barrier Reef.

The growing amount of human noise pollution in the ocean could lead fish away from good habitat and off to their death, according to new research from a UK-led team working on the Great Barrier Reef.

After developing for weeks at sea, baby tropical fish rely on natural noises to find the coral reefs where they can survive and thrive.  However, the researchers found that short exposure to artificial noise makes fish become attracted to inappropriate sounds.

In earlier research, Dr Steve Simpson, Senior Researcher in the University of Bristol’s School of Biological Sciences discovered that baby reef fish use sounds made by fish, shrimps and sea urchins as a cue to find coral reefs.  With human noise pollution from ships, wind farms and oil prospecting on the increase, he is now concerned that this crucial behaviour is coming under threat.

He said: “When only a few weeks old, baby reef fish face a monumental challenge in locating and choosing suitable habitat.  Reef noise gives them vital information, but if they can learn, remember and become attracted towards the wrong sounds, we might be leading them in all the wrong directions.”

Using underwater nocturnal light traps, Dr Simpson and his team collected baby damselfish as they were returning to coral reefs.  The fish were then put into tanks with underwater speakers playing natural reef noise or a synthesised mix of pure tones.  The next night the fish were put into specially designed choice chambers (long tubes with contrasting conditions at each end in which fish can move freely towards the end they prefer) with natural or artificial sounds playing.  All the fish liked the reef noise, but only the fish that had experienced the tone mix swam towards it, the others were repelled by it.

Dr Simpson said: “This result shows that fish can learn a new sound and remember it hours later, debunking the 3-second memory myth.

“It also shows that they can discriminate between sounds and, based on their experience, become attracted to sounds which might really mess up their behaviour on the most important night of their life.”

In noisy environments the breakdown of natural behaviour could have devastating impacts on success of populations and the replenishment of future fish stocks.

Dr Simpson added: “Anthropogenic noise has increased dramatically in recent years, with small boats, shipping, drilling, pile driving and seismic testing now sometimes drowning out the natural sounds of fish and snapping shrimps.  If fish accidentally learn to follow the wrong sounds, they could end up stuck next to a construction site or follow a ship back out to sea.”

The study is published in Behavioral Ecology and was carried out at Lizard Island Research Station.  The work was supported with a fellowship for Dr Simpson from the UK Natural Environment Research Council and by the Australian Institute of Marine Science for Dr Mark Meekan.