Why are we interested in studying genes in type 1 diabetes research?

We know that type 1 diabetes occurs most often in individuals who have certain combinations of genes.  However these genes alone are not sufficient to cause the condition, but in combination with as yet unidentified environmental factors, type 1 diabetes is initiated in genetically susceptible individuals.  If we understand how certain genes contribute someone developing the condition, then we can develop strategies to combat the effects of these genes.

Since our Genetics Laboratory was established in 1998 we have collected DNA samples from more than 6,000 people participating in the Bart’s Oxford family study. We are very thankful to everyone who has participated. By using the data from these samples, we have been able to carry out and contribute to many studies defining the importance of genes in susceptibility to type 1 diabetes, in collaboration with numerous other researchers worldwide.

Genes and antibodies – pulling research together

Genes allow us to identify individuals at genetic risk of type 1 diabetes but on an individual basis this estimation of risk is not very informative.  If we also include data from islet autoantibody assays that are highly predictive of future disease we can learn more about diabetes.  Here in Bristol, we have the facility to research the role genes have alongside markers detected in the immune response to build an accurate model of the natural history of type 1 diabetes.

What we have achieved

There is a hierachy in genetic risk for type 1 diabetes: Using a large population-based UK cohort of families with type 1 diabetes, from the Bart’s Oxford study, we found that one set of genes that contribute to susceptibility to type 1 diabetes – the HLA genes- exist in a hierarchy from very susceptible to strongly protective. J Clin Endocrinol Metab. 2004 89:4037-43

Differences in genetic susceptibility between girls and boys in adolescence: Most children who develop type 1 diabetes do so in adolescence with the incidence in girls generally peaking earlier than boys. We have found that girls carrying a particular form of the interleukin 6 gene develop disease earlier than other children and this effect appears to be precipitated by the onset of puberty. Diabetes 2005 54:1245-8

Natural killer (NK) cells are the first cells to detect viral infection. We have found that certain combinations of NK cells receptors are more common in children who develop type 1 diabetes early in life. Diabetologia.2011;54:3062-70. 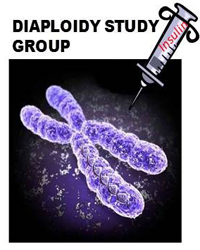 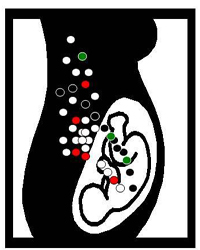 It has been known for some years that mother and baby exchange stem cells in the course of pregnancy this process is known as microchimerism.  We have looked for maternal cells in children with type 1 diabetes, and found that around 20 per cent of these children have unusually high levels of maternal DNA in their circulation.  An even more surprising finding is that some maternal cells have entered the child's pancreas and are functioning there as insulin-producing beta cells.

Originally, the study of 172 individuals and pancreatic tissue from four males was designed to ask the question whether small numbers of maternal cells might be involved in any way in Type 1 diabetes.  Professor Gale said "Our initial theory was that perhaps, in some situations, too many cells cross from mother to fetus in pregnancy.  Could diabetes result because the child lost tolerance to those cells because they are genetically half foreign?  Our research appears to disprove this. It is possible that the maternal cells may even be helping to regenerate damaged tissue in the pancreas."

We are excited about the observation that maternal microchimerism results in cells that make insulin. These maternal stem cells could provide new insights into how insulin producing beta cells are generated. PNAS Jan 30; 104:1637-42