Shedding new light on the diet of extinct animals 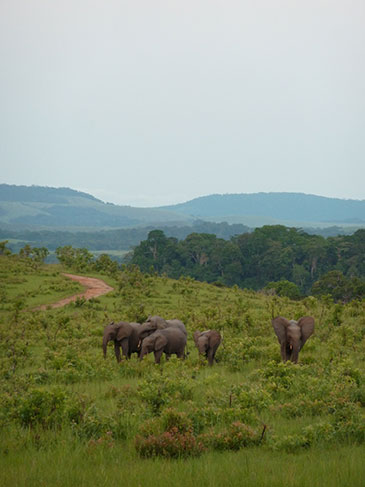 A herd of forest elephants in their natural environment in the La Lopé National Park, Gabon © Estel Sarroca

A study of tooth enamel in mammals living today in the equatorial forest of Gabon could ultimately shed light on the diet of long extinct animals, according to new research from the University of Bristol.

Reconstructing what extinct organisms fed on can be a real challenge. Scientists use a variety of methods including the structure of an animal’s bones, analysis of its stomach contents and the patterns of wear left on the surface of its teeth.  Geochemical methods have also proved useful but can be limited by poor preservation of the animal’s remains.

Dr Jeremy Martin, formerly of Bristol’s School of Earth Sciences and now at the Laboratoire de Géologie de Lyon: terre, planètes et environnement, University of Lyon/ENS de Lyon, and colleagues found that magnesium isotopes are particularly well suited to deciphering the diet of living mammals and, when used in conjunction with other methods such as carbon isotopes, they could open up new perspectives on the study of fossilised animals.

Dr Martin said: “Most chemical elements exist in distinct forms called isotopes which are characterized by different masses.  Therefore, all the isotopes of an element will behave differently during a chemical reaction preferentially sorting out heavier ones from lighter ones."

As noted by Dr Balter, who took part in the study: “Biological processes such as digestion involve important isotopic fractionations of the various elements assimilated through food consumption so the stable isotope composition of an organism tends to reflect its diet – we are what we eat.”

Scientists know that the carbon and nitrogen isotopes preserved in bone collagen can give direct evidence about an animal’s food intake.  However, because of the rapid decay of organic matter, these inferences are limited to the recent past.

Dr Martin and colleagues explored the isotopic variability of one of the major elements that compose tooth apatite, the hardest biological structure to retain its pristine signal throughout the fossil record.

Teeth from various mammals living today in the equatorial forest of Gabon were purified for magnesium isotopes.  The results show that the isotope ratios of magnesium 26 mg/24 mg increase from herbivore to higher-level consumers (such as carnivores) and, when used in conjunction with other geochemical proxies, serve as a strong basis to infer the diet of mammals.

Dr Martin said: “Many fossil groups do not have living analogues and inferring their diet is far from clear.  Applying a new perspective to palaeoecology by using non-traditional isotopes (such as magnesium or calcium in conjunction with traditional approaches) holds great promise for our understanding of how such ancient organisms interacted with each other.”

The work is published today in the Proceedings of the National Academy of Sciences (PNAS).