What are the prospects for sustaining high-quality groundwater? 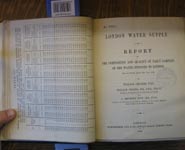 New research led by the University of Bristol’s Department of Civil Engineering has looked at nitrate transport from agricultural land to water in the Thames basin.

New research has looked at water quality measurement over the last 140 years to track this problem in the Thames River basin.

The NERC-funded study, led by the University of Bristol’s Department of Civil Engineering, has looked at nitrate transport from agricultural land to water in the Thames basin.  The team used a simple model to estimate the amount of nitrate able to leach from soils to the groundwater based on land use practices along with an algorithm that determined the route nitrate would take to reach surface or groundwater from agricultural areas.

The Thames River catchment provides a good study example because the water quality in the river, which supplies drinking water to millions of people, has been monitored for the past 140 years, and the region has undergone significant agricultural development over the past century.

The study found that nitrate concentrations in the Thames rose significantly during and after World War II to about double their previous level, then increased again in the early 1970s.  Nitrite concentrations have remained at that high level even though nitrate from inputs from agriculture declined from the late 1970s to early 2000s.

The researchers observed it takes some time for nitrate to reach the river, and their analysis suggests that the jump in nitrate concentrations from 1968 to 1972 is due to the delayed groundwater response to ploughing of permanent grasslands during World War II.

Dr Nicholas Howden, Senior Lecturer in Water in the Department of Civil Engineering, who led the research, said: “Balancing the needs for agriculture and clean groundwater for drinking requires understanding factors such as the routes by which nitrate enters the water supply and how long it takes to get there.

“Our results suggest it could take several decades for any reduction in nitrate concentrations of river water and groundwater, following significant change in land management practices.”

Co-author of the research paper, Dr Fred Worrall in the Department of Earth Sciences at Durham University, said: “The 60s and 70s saw a gradual intensification of food crop production and consequent nitrate release from the land. If your input is dispersed, your output is dispersed; if your input is sharp, your output is sharp. The aquifer is just transporting it; it’s not processing it. The nitrate comes through as a pulse.”

Co-author, Professor Tim Burt in the Department of Geography at Durham University, said: “You can work out the budget, and there is a phenomenal amount of nitrogen accumulating somewhere in the Thames basin. We don't know where and we don't know in what form, but it represents a potential legacy for a long time. The effects of land-use changes can take decades to filter through the river basin and this has major implications for policies to manage rivers.”

The researchers found that any solution to the nitrate issue will require a long-term vision for water-quality remediation.  In terms of sustainable groundwater, there seem to be no ‘‘quick fixes’’ and if groundwater nitrate concentrations continue to rise in the UK the worst may be yet to come.

The study could help water and land management planners identify practices that best preserve both agricultural production and water quality.

The study was partly funded by a NERC grant. The authors are grateful to all those who collected and collated this water quality and land use data over the past 140 years.
Please contact joanne.fryer@bristol.ac.uk for further information.