Where it all began – The Incredible Human Journey

In the ultimate travel story, Dr Alice Roberts (presenter of Coast and Don’t Die Young) from the University of Bristol’s Department of Anatomy, crosses the globe to find out how our ancestors colonised the planet. In ‘The Incredible Human Journey’, a new BBC 2 series airing this Sunday [10 May], she addresses the fundamental question: where do we really come from?

In the ultimate travel story, Dr Alice Roberts (presenter of Coast and Don’t Die Young) from the University of Bristol’s Department of Anatomy, crosses the globe to find out how our ancestors colonised the planet. In ‘The Incredible Human Journey’, a new BBC 2 series airing from 10 May, she addresses the fundamental question: where do we really come from?

On her journey Alice examines bones, stones and the latest scientific theories to discover how one small group of people left Africa, their descendents crossing deserts, oceans and mountains, surviving an Ice Age and overcoming the Neanderthals to populate every corner of the world. On the way, she examines how our skin colour and other distinctive features evolved across each of the continents to produce the global diversity of peoples today.

Alice’s mission to retrace our ancestors’ footsteps takes her to the depths of Africa, Asia, Europe, Australia and the Americas to learn the secrets of our nomadic past. In this epic five-part series, Alice brings together the latest discoveries in genetics, archaeology, paleoanthropology and climatology to explain how our journeys across the world made us who we are today. 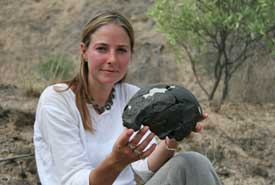 In the first episode of the Incredible Human Journey Alice treks into the remote wilderness of the Great Rift Valley of Ethiopia to find the spot where the earliest known remains of our species were discovered. Travelling across the continent, Alice learns how the Click language, the design of our bodies and our ancient hunter-gatherer skills may have contributed to our successful survival and migration across Africa.

In Cape Town, Alice meets geneticist Raj Ramesar, who tells her of the astonishing discovery that every single person who isn’t African is descended from one single group of people who left Africa around 70,000 years ago.

But how did they do it? With only stone-age tools, it seems impossible that one small group of our ancestors could have made the crossing – either over hundreds of miles of desert or across the Red Sea to leave Africa – so Alice must turn to leading experts and the latest scientific research to discover the route that they may have taken.

Join Dr Alice Roberts as she retraces our courageous migration out of Africa and examines the origins of our global family tree.

In the second episode of the Incredible Human Journey, Dr Alice Roberts visits the frozen wastelands of Asia and continues in her quest to discover how a small band of humans came to eventually populate the globe.

Alice travels to Siberia, one of the coldest places on earth, to film the Evenki nomads, a remote tribe who have much to teach us about how our ancestors survived extreme climates. She discovers how one of the world’s oldest sewing needles could be the key to understanding how early humans conquered their environment.

Next, Alice looks at an intriguing anthropological puzzle. If every single non-African in the world is descended from one group of people that left Africa around 70,000 years ago, why does the world's population look so different? Alice explores what may have occurred during human migration to produce Chinese physical characteristics, and considers a controversial take on Chinese evolution that claims the Chinese do not share the same African ancestry as other peoples.

In the third episode of the Incredible Human Journey, Dr Alice Roberts takes on Europe and determines how our ancestors managed to survive the dual challenges of the ice age and the Neanderthals. In a TV first, Alice sees revealed the face of the earliest known European – a person with distinctly African features. She then investigates an intriguing question: what happened on the Human Journey that made Europeans change colour, from brown to white?

When our dark-skinned ancestors arrived in Europe they found the Neanderthals had got there first. They had equally sharp weapons, bigger brains and were better adapted to the cold than us. But over thousands of years, somehow, Homo Sapiens spread, while the Neanderthals slowly died out.

Alice challenges current assumptions about how we overcame the Neanderthals and explores what an ivory flute has to tell us about how our ancestors out-competed their rivals.

In addition to Alice's contribution to the series the BBC commissioned two other Bristol University academics to act as programme consultants. Dr Joy Singarayer, Lecturer in Coastal Oceanography and Paul Valdes, Professor of Physical Geography from the University's School of Geographical Sciences, provided advice on past climates, and prepared a number of animations and unique computer simulations that are shown on screen by Alice.