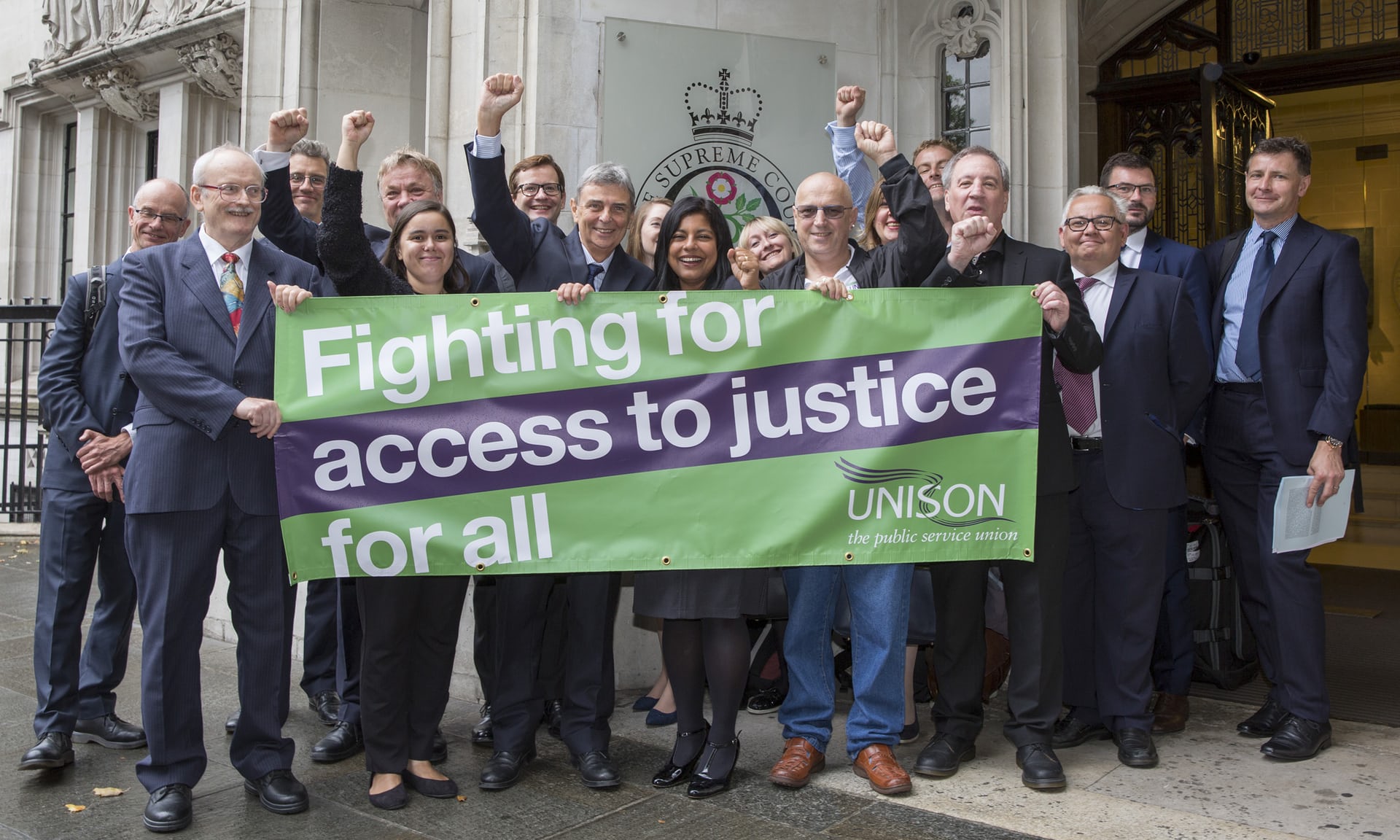 Prof Michael Ford QC and Head of School, Prof Joanne Conaghan, at a recent sell-out revision lecture on his advocacy in the Supreme Court case of R (Unison)

Today marked a victory for common law, and for the Law School’s Professor Ford, as the Supreme Court handed down a ground-breaking judgment on Tribunal Fees.

Cited by industry leaders as ‘… the most important judgment in employment for a century’, a seven-person Supreme Court has found that the Employment Tribunal and Employment Appeal Tribunal (EAT) Fees Order 2013 prevents access to justice and is unlawful.
The landmark result marks a successful appeal by UNISON, represented by Dinah Rose QC, Karon Monaghan QC and others – and supported by Professor Ford and colleagues from Old Square Chambers acting on behalf of the intervener, the Equality and Human Rights Commission (EHRC).
The judgment is of wide constitutional significance sanctioning a high level of protection under the principles of the common law to ensure that access to justice is protected for all.
In his judgment Lord Reed commented;
“Without [access to the courts], laws are liable to become a dead letter, the work done by Parliament may be rendered nugatory, and the democratic election of Members of Parliament may become a meaningless charade. That is why the courts do not provide a public service like any other”
On the case, Professor Ford commented,
"It has been a great privilege to work on one of the most important employment law cases since Taff Vale in 1901*, and a momentous ruling on the fundamental constitutional right of access to the courts and the rule of law”
The immediate consequence is that the Fees Order is quashed, so that as of today fees cease to be payable for claims in the employment tribunal (ET) and appeals to the EAT, and fees paid in the past must be reimbursed.
In a related Guardian article the TUC general secretary, Frances O’Grady, said: “This is a massive win for working people. Too many low-paid workers couldn’t afford to uphold their rights at work, even when they’ve faced harassment or have been sacked unfairly.”
The lawfulness of the Fees Order was challenged by UNISON – and supported by the interveners, the Equality and Human Rights Commission. UNISON lost in two Divisional Court hearings, and in the Court of Appeal.
Professor Joanne Conaghan, Head of School, commented.
“This is a great outcome for access to justice and a proud moment for our Law School: our students were thrilled to watch their lecturer, Professor Michael Ford QC, advocate in the Supreme Court earlier this year and to witness law in action at the highest levels.”
A copy of the judgment is available here.

* Taff Vale Railway Co v Amalgamated Society of Railway Servants, 1901, more commonly known as the Taff Vale case, is a formative case in UK labour law that held that, at common law, unions could be liable for loss of profits to employers that were caused by taking strike action. The labour movement reacted to Taff Vale with outrage; the case gave impetus to the establishment of the UK Labour Party and was soon reversed by the Trade Disputes Act 1906 Trade Disputes Act 1906.