Breaking the cycle of nuclear indecision: Government must act 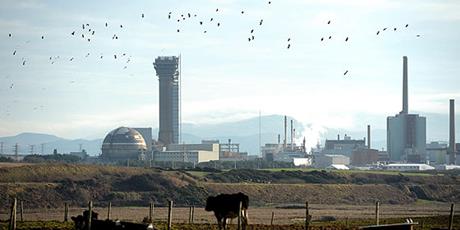 The House of Lords Science and Technology Committee report 'Nuclear research and technology: Breaking the cycle of indecision' states that we have reached a critical moment for the future of the United Kingdom as a serious nuclear nation, and sets out a series of recommendations for the new Government after the general election.

The Committee, taking advice from the Cabot Institute’s Prof. Tom Scott, says that the undoubted potential of the civil nuclear sector has been blighted by the indecision of successive Governments. Now, within the context of the industrial strategy and amid the challenges of Brexit, it is critical for the incoming Government to set out a decisive future for this industry.

The report further sets out the risks to the UK nuclear sector if membership to Euratom expires at the end of the two year negotiating period without a replacement. The UK risks losing its lead in fusion research as well as losing access to the markets and skills it needs to construct new nuclear power plants and existing power plants could be unable to acquire fuel.

Earl of Selborne, Chairman of the Committee said: “The UK has long-standing and continuing commitments to civil nuclear energy and is now strategically positioned to capture opportunities, especially for Small Modular Reactors. The incoming Government must end its cycle of indecision on nuclear policy and we urge it to take a clear, firm view on SMRs and wider civil nuclear strategy.

“We also found that the amount of UK funding for nuclear research, development and innovation is much lower than public funding levels in other leading nuclear nations, including the US, France and Japan. If the Government’s aim is for the UK to be active across the main areas of nuclear R&D it needs to make significant investments in new technologies or we risk falling behind the rest of the world.”

The report calls on the Government to decide as a matter of urgency whether it wishes the UK to be a serious player in developing nuclear generation technology whether as a designer, manufacturer and operator, or to restrict its interest to being an operator of equipment supplied by others from overseas. These delays in taking civil nuclear policy decisions has seriously damaged the UK industry's potential ability to contribute effectively to the national policies which might ultimately be favoured.

Once the Government has made this overarching decision, other strategic decisions will flow from this to define a clear set of objectives and timescales with which the UK nuclear industry can align itself through a revitalised nuclear industry council.

The Government’s failure to make a decision on its strategy for small modular reactors (SMRs) is a prime example of its inaction in the civil nuclear arena. Not keeping to the stated timetable for the SMR competition has had a negative effect on the nuclear sector in the UK and if the Government does not act soon the necessary high level of industrial interest will not be maintained.

Speaking of his role advising the committee and of the report itself, Prof. Tom Scott said "As the appointed Special Adviser my role was to help in all aspects of the enquiry from helping to shape the scope, to selecting the witnesses to give oral evidence, to writing the questions for written and oral responses, to shaping the oral sessions (in terms of lines of questioning), to briefing the Lords Committee to helping draft the reports and associated recommendations. It was VERY involved and thoroughly enjoyable!"

"The report is particularly critical of the Government's ability over many decades to take any positive leadership in the nuclear industry; this also applies to energy and electricity supply in general. The Government has failed to set a clear vision and objectives across many different aspects of nuclear from Geological Disposal to reprocessing of fuel and most recently on the international opportunity posed by SMRs (Small Modular Reactors). The Government needs to better coordinate its cornucopia of different nuclear organisations and to provide suitable support mechanisms to enable the national supply chain to effectively coordinate itself versus other international competitors."

"The report also underlines the urgent need for the NNL to be core funded to enable it to properly fulfil the role of a national laboratory and also the threat posed by leaving Euratom as part of Brexit. One key message is that the UK needs to really up its game in engaging internationally; we're too small and lacking in universal expertise to realise our nuclear ambitions on our own."

"The Government also needs to accept that nuclear, as an industry, operates over very long timesclaes (over many government terms) and requires protection from short termist Government behaviours. It needs strong and well voiced  backing and fiscal support over many decades. Without this, it will be near impossible for the UK to achieve its goal of become carbon neutral without the lights going out."