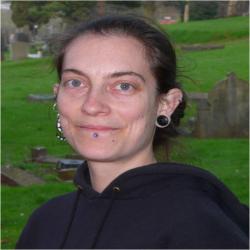 2009 - Present -  PhD at the University of Bristol - 'Conservation Biology of the Grey Long-Eared Bat, Plecotus austriacus'

2006 - 2008 -  M.Sc in Ecology, with Distinction, at Blaustein Institutes for Desert Research, Ben-Gurion University

2003 - 2006 -  B.Sc Hons in Biodiversity Conservation and Management, with Distinction, at DICE, University of Kent at Canterbury

In my PhD research, I use an integrated approach to determine the ecological and conservation requirements of P. austriacus, in the context of factors that limit the distribution and abundance of locally rare but globally common species.

The project is divided into five parts, each addressing a different aspect of the ecology, behaviour, biogeography and genetics of P. austriacus, by employing a diversity of biological research methods including radio-tracking, microscopic diet analysis,molecular diet analysis, predictive present and future ecological niche modelling, phylogeographical analysis and a study of genetic population structure.

1. Use habitat suitability modelling to map the potential distribution of P. austriacus in Britain and determine the ecogeographical variables that limit its distribution.

2. Predict the potential impact of future climate change on the distribution of P. austriacus in Britain and Europe.

3. Analyse the effect of reproductive condition on night activity patterns and the ranging behaviour of P. austriacus.

4. Relate patterns of foraging habitat selection to habitat loss and degradation due to urbanisation and agricultural intensification.

5.  Describe the diet of P. austriacus in Britain.

7. Assess the phylogeography of the English P. austriacus population, its relation to European populations and historical patterns of colonisation and population expansion.

8. Determine the genetic population structure, effect of landscape elements on patterns of gene flow, extent of isolation of maternity colonies, and the genetic viability of the  English P. austriacus population.

This project is in collaboration with the Bat Conservation Trust and is funded by the Hon. Vincent Weir 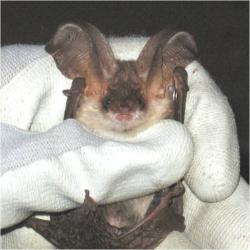 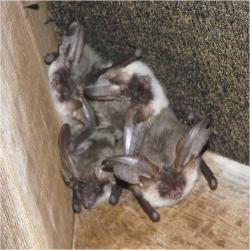 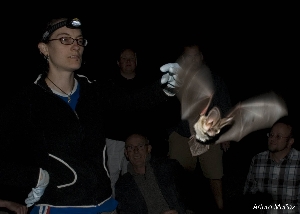 2007-2008 - M.Sc research project -  ‘Use of natural bodies of water by desert-dwelling insectivorous bats’

I combined acoustic monitoring with filming and an experimental approach to research the effect of interspecific competition and resource partitioning on desert bat assemblages, as well as the importance of the size and permanency of open bodies of water for the maintenance of biodiversity in desert environments.

The project involved a six week study of an Amazonian bat community, to research the effect of habitat complexity and plant diversity on tropical bat diversity and community structure.